I feel so weird, writing a blog post about my crypto strategy, like I know anything about this. I don’t really, I’m just messing around with it, but I’ve come up with a simple, relatively risk-free strategy that seems to work. Maybe it’ll work for you, too.

First off, let me tell you how I got into crypto. Like seemingly everyone else, I got interested in Bitcoin at the end of 2017. Up until then I had been aware of Bitcoin, but thought it was too late, it was only worthwhile if you got in at the start. The tipping point for me was when my little brother was talking about Bitcoin with me and our mum in a pub. I thought, “If even my little brother is doing this, I have to do it!”

So I bought some Bitcoin. Then I bought some Etherium too. I even put a little into some alt-coins that were going round at the time, whose names I have long forgotten. And it was fun, for a while. I called it the “uppy-downy game” … and then it went downy-downy, day after day, week after week.

I had done exactly what you’re not supposed to do: I got swept up by the hype and bought in at the peak, only to lose it all in a trough. I thought that was it, I’d lost my money. I thought the “Bitcoin bubble” had burst.

I bought high, but at least I didn’t make the mistake of selling low. I simply wrote it off as lost money and just forgot about the whole thing for a few years.

In early 2021 I started to hear about Bitcoin again and decided to check in on my “worthless” crypto currencies. To my surprise, they weren’t doing so badly. Several of the alt-coins had indeed died, but Bitcoin and Etherium were making up for them. I decided to consolidate, and transferred everything I could back into BTC and ETH. And then I just watched to see what happened.

As the weeks went on, the crypto value climbed until it was equal to what I had initially invested. I was delighted! And then I saw it dip a bit, and I panicked. I thought I was about to lose everything again, so I cashed out the whole lot. After fees, it came to a little under what I had initially invested. It felt good to have it back in my bank account, where it felt like “real money” again. At that time, having the money felt more important than the risk of losing it all again.

I soon realised that I’d been too hasty in withdrawing, and with hindsight it turns out if I had just held my nerve I could have tripled my initial investment by now. I guess I was still a crypto beginner, after 3 and a bit years of “negative” experience.

With that embarrassing, but probably familiar history over with, let me tell you my current strategy.

First, I realised that crypto is a long term game. OK, if you’re very lucky, you might invest in an alt-coin just at the right time, just before it hockey sticks with thousands of percent profit, and withdraw right at the peak. Let’s be honest: that isn’t most of us. Instead, I realised that it’s sensible to invest little and often, which kind of spreads out the risk of the fluctuations.

When I say “little and often” I mean “not too little” and “not too often”, otherwise transaction fees will eat up a lot of your money. I decided I can afford to invest £100 per month.

So at the start of each month, I put £100 into crypto. I’ve been doing this since May 2021, and so far I’ve invested 4 times into Bitcoin, and twice into Etherium.

But here’s the thing: whenever the value goes above £50 over what I put in, I withdraw £50. I don’t actually withdraw it to my bank account; I just keep it in Coinbase and it goes towards my next month’s £100 investment. This keeps transaction fees down. August was a good month for Bitcoin: I withdrew twice, meaning I didn’t have to transfer from my bank account to invest in September. The £100 that I would otherwise have paid in from my bank account, I marked as profit in one of my lovely little spreadsheets. (Yes, I love spreadsheets!)

Right now, crypto in general is doing really well, and in this month (October 2021) I withdrew £50 three times: twice from Bitcoin, and once from Etherium. So in total, I’ve made £250 out of my £600 investment. Not too bad!

This is, admittedly, a low-risk, low-reward strategy: there’s always that thought, “What if I’d have just kept it all in?!” This strategy won’t make me a millionaire overnight, but it does minimise my stress levels. And I think it’s a sensible strategy: at least this way I’m withdrawing while the market is high, and I have it ready to reinvest when the market is low.

We always seem to see crypto graphs over time looking like this: 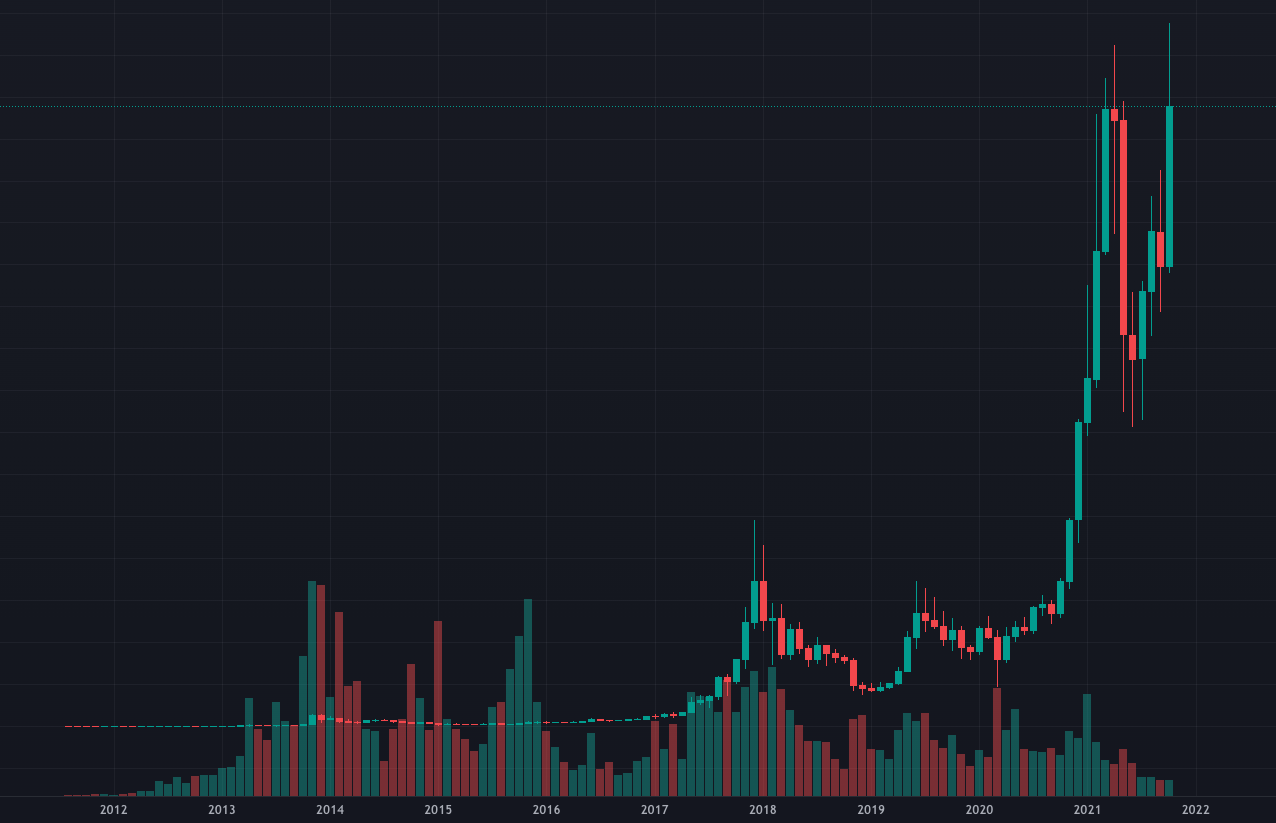 That’s Bitcoin against the US dollar, and it looks totally bonkers and is very hard to see what’s actually going on. Given that graph, you can see why I felt like I’d “lost it all” having invested at the 2017 peak and suffered the downturn of 2018.

When we look on a logarithmic scale, suddenly patterns become a lot clearer: 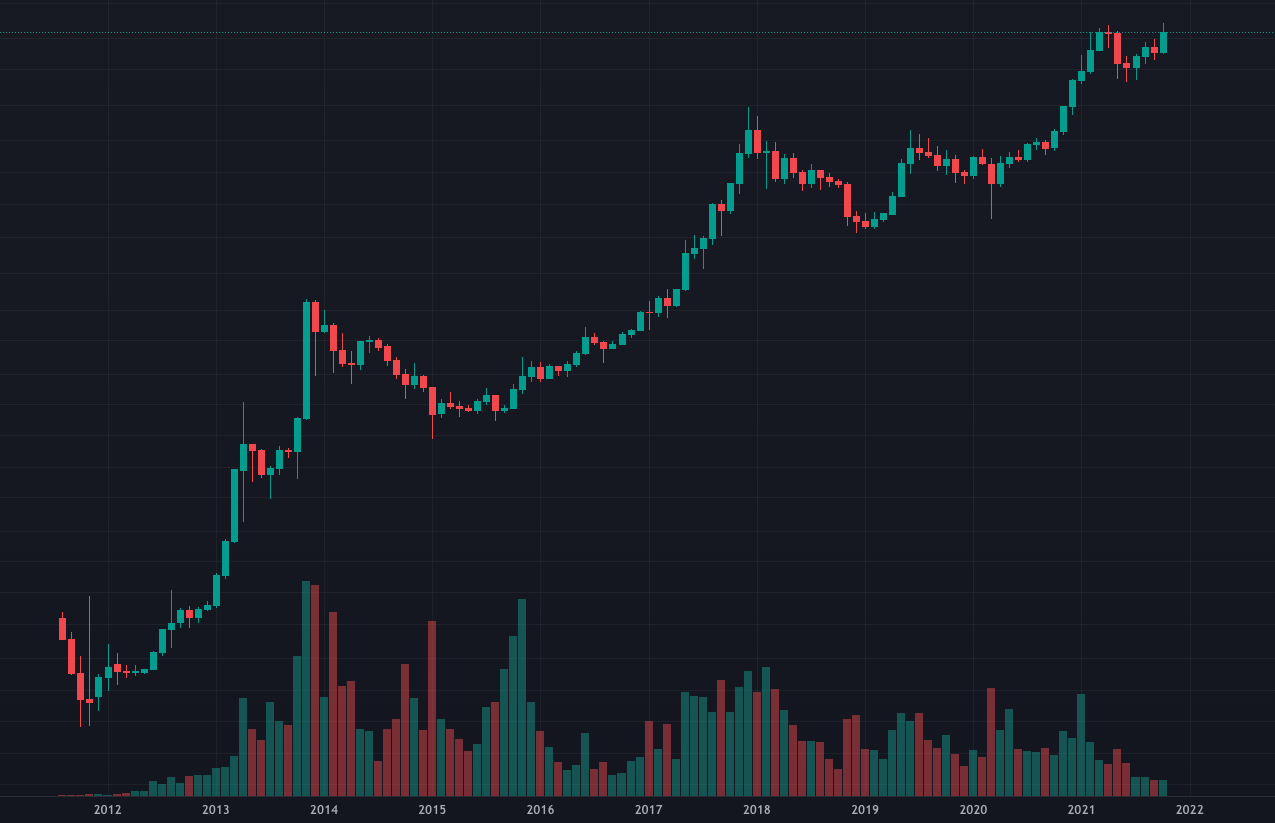 I don’t know we don’t see this scale more often. It made the whole thing make so much more sense for me.

See the peak at the end of 2013? That was huge at the time - one Bitcoin was worth almost $200, breaking all previous records. There was a media frenzy! And then came a year and a half of decline. But look again at 2017 - it grew to nearly $10,000 and sparked a huge surge of interest (including me and my little brother) … before the decline that made me feel I’d been rather foolish. But now you can see there is a 4-year cycle, which correlates to the Bitcoin “halving event”, when the reward for mining Bitcoin is cut in half.

I have learned it is never too late to get started in crypto. But my advice: don’t go all in, don’t trust a hunch, don’t get swept up in the hype and invest on a high. Instead, work out a strategy and stick to it. Unless you don’t … (SHIB, I’m looking at you!) … yeah, that’s gonna be for another blog post!

As I write this, crypto.com and coinbase.com are both down. There is some serious crypto hype going on right now! The end of 2021 is starting to feel a lot like the end of 2017. 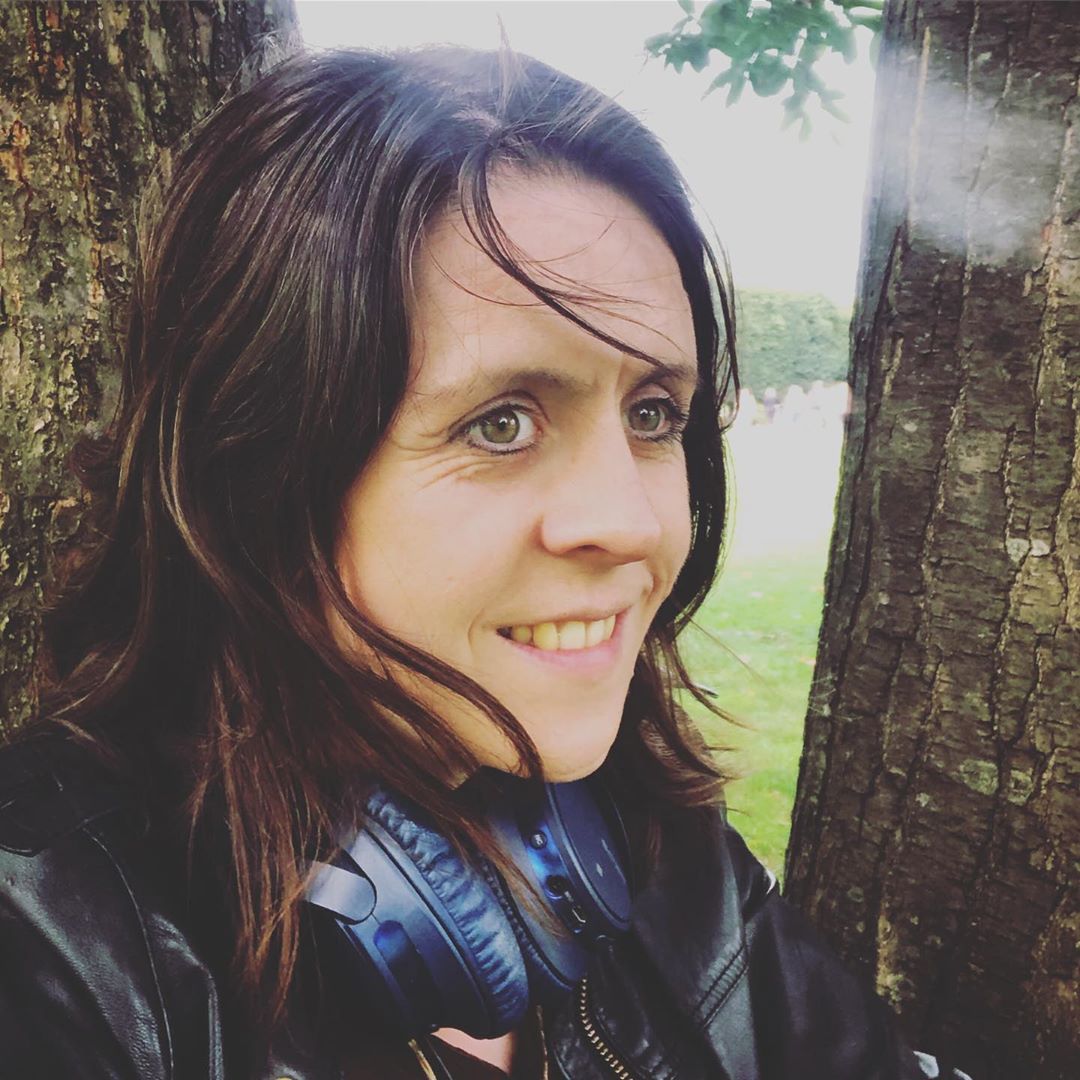