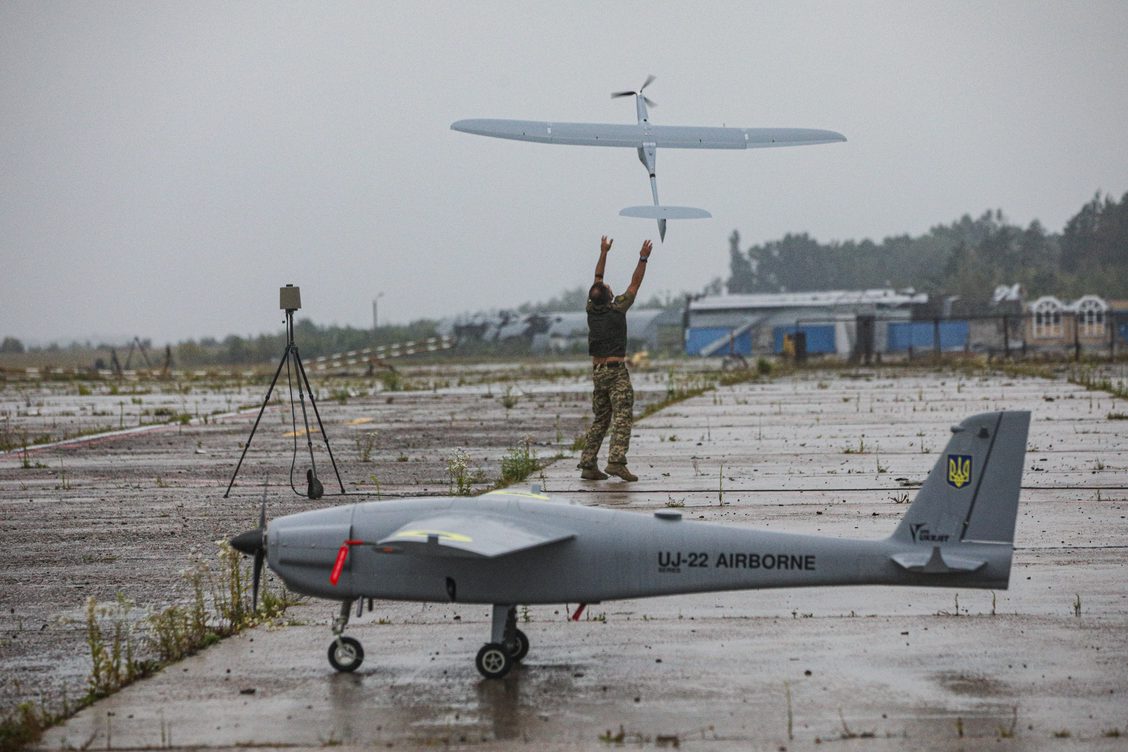 A military operator launches a FlyEye WB Electronics SA, a Polish reconnaissance drone, as a part of the program ‘The Army of Drones’ during test flights in Kyiv Oblast on August 2, 2022. (Kostyantyn Chernichkin)

SBU identifies collaborators behind large-scale theft of Ukrainian grain. According to the Security Service of Ukraine (SBU), Yeven Balytskyi, a former lawmaker from Zaporizhzhia Oblast, Oleksandr Saulenko, appointed by Russians as their proxy leader in the occupied Berdyansk, and Volodymyr Stelmachenko, in charge of the Berdyansk port, led the loot of Ukrainian grain. Russia stole more than 650,000 tons of grain worth $200 million in total, from Russian-occupied parts of Kherson Oblast and Zaporizhzhia Oblast. Russia used up to 15 ships to transport the grain, including vessels registered in Syria.

Turkey: 3 ships carrying grain to leave Ukrainian ports on Aug. 5. This was announced by Turkish Defense Minister Hulusi Akar, CNN Turk reported. Akar also said that an empty ship is expected to head to Ukraine after an inspection in Istanbul. Overall, ten ships in the ports of Odesa and Chornomorsk are already loaded with grain and are ready for shipment.

Watchdogs: State bodies haven’t filed any motions to confiscate Russian assets since May. The report was published by the Anti-Corruption Action Center and AutoMaidan in online newspaper Ekonomichna Pravda. In May, the Verkhovna Rada passed a law that allows the Ukrainian authorities to confiscate the assets of Russian and Belarusian citizens participating in aggression against Ukraine or undermining its sovereignty and territorial integrity.

Ukrainian authorities seize collaborator’s assets worth $4 million. According to the Security Service of Ukraine (SBU), collaborator Yevhen Balytsky’s assets include four aircraft. In May Balytsky, a Ukrainian citizen, became the head of the occupation administration in Russian-controlled parts of Zaporizhzhia Oblast and was charged with collaboration. Previously he was a member of Ukraine’s parliament and the regional legislature from two pro-Kremlin parties - the Party of Regions and the Opposition Bloc.

UK Intelligence: Russian forces have likely positioned radar reflectors **near Dnipro River in Kherson.**The U.K. Defense Ministry said on Aug. 4 in its intelligence update that Russian forces likely placed the reflectors near the recently damaged Antonivsky Bridge and rail bridge. The ministry noted that they are likely being used to hide the bridge from possible missile targeting equipment, which highlights the threat Russia feels as Western military support increases.

FM Kuleba: Amnesty International’s report creates ‘false balance between criminal and victim.’ Foreign Minister Dmytro Kuleba was “outraged” by the report accusing Ukraine’s military of putting civilians in danger by creating bases and placing weapons in residential areas, including schools and hospitals. Russia has regularly been caught using this excuse to hit Ukraine’s civilian areas, like in March 9 attack on the maternity hospital in Mariupol. “Stop creating a false reality where everyone is a little guilty of something,” Kuleba said.

Head of Amnesty International Ukraine criticizes report published by main office. The head of Amnesty International Ukraine Oksana Pokalchuk said that the Ukrainian team wasn’t involved in the preparation of Amnesty’s report that accused Ukraine’s military of endangering civilians. According to her, Amnesty dismissed all arguments by the Ukrainian team regarding the incompleteness of the report, while the authors didn’t wait for a response from Ukraine’s Defense Ministry.

In its brutal war of conquest in Ukraine, Russia has been destroying or attempting to destroy everything in its path since Feb. 24. In addition to the immense human toll Russia’s war has taken on Ukraine, the country’s businesses – from small сozy cafés, cinemas, and supermarkets to large metallurgical plants and agricultural corporations – have suffered greatly from the invasion. Read our story on how Ukrainian businesses struggle to find compensation for damages caused by the war.

Serhiy Prytula’s Charity Foundation introduced the Nest project focused on helping families who lost their houses due to Russia’s ongoing war. The initiative relies on international donors to cover the costs, with the first house being covered with the money raised by American schoolchildren. Read our story here.

Kremlin-backed commander of division that fired on civilians in Donbas killed in action. The Strategic Communications Department of Ukraine’s Armed Forces said Olga Kachur, also known as ‘Korsa’ often disguised herself as a Ukrainian soldier and committed war crimes in order to blame them on Ukraine’s military, the New Voice of Ukraine reported. The media outlet also reported that Kachur said in interviews with Kremlin-controlled media that she took joy in killing Ukrainians. According to Ukrainian journalist Denis Kazanskyi, Kachur worked in the Horlivka Police department until she joined Russia’s proxies in occupied parts of Donbas in 2014.

Stoltenberg: War in Ukraine is Europe’s most dangerous time since World War II, Russia must not be allowed to win. NATO Secretary-General Jens Stoltenberg said on Aug. 4 that NATO and its members have two tasks: support Ukraine in its fight against a Russian invasion and prevent the conflict from spreading into a war between Russia and NATO. “If Russia wins this war, they will have confirmation that violence works. Then other neighboring countries may be next,” he said.

EU to allocate 16 million euros to help victims of sexual violence in Ukraine. Part of the funds will support local civil society organizations and emergency services, as well as investigative teams led by the Prosecutor General’s Office. The funds will also pay for education materials and setting up remote education for children who fled the country.

Canada to send up to 225 instructors to train Ukrainian troops in UK. The first instructors will arrive next week, Reuters reported. Most of them will be from the 3rd Battalion, Princess Patricia’s Canadian Light Infantry, based in Edmonton, Alberta.