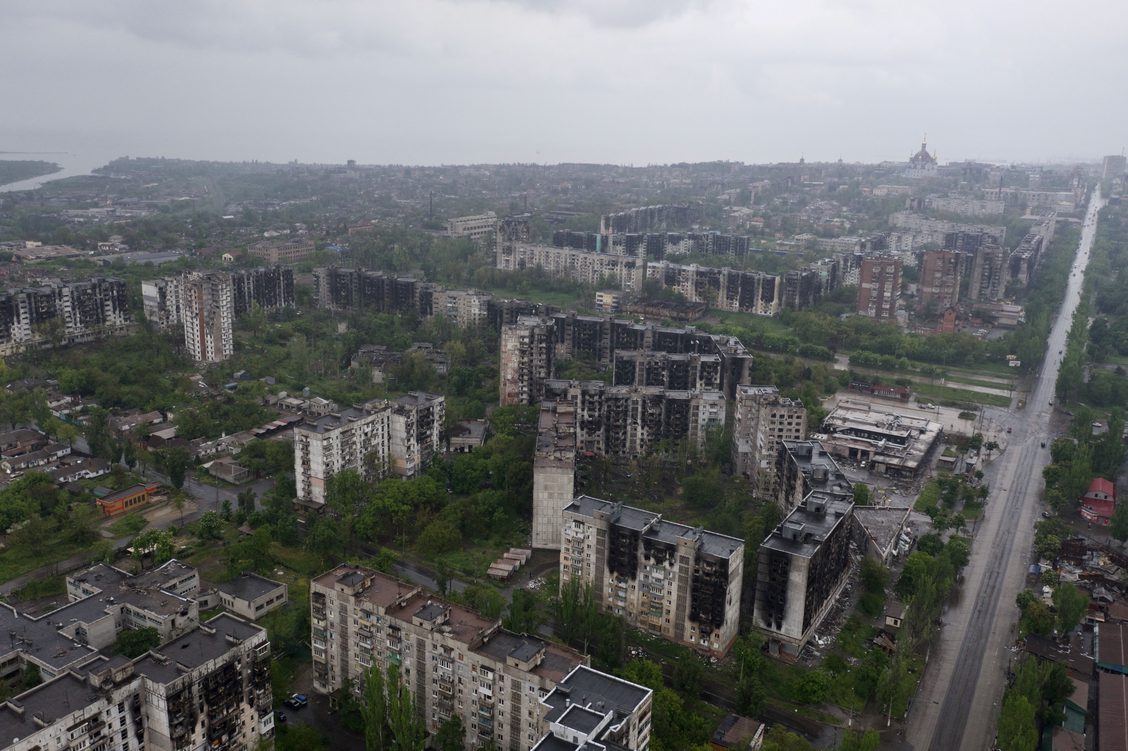 An aerial view of the Central District of the besieged port city of Mariupol, Donetsk Oblast, on May 18, 2022. (Photo by Andrey Borodulin / AFP via Getty Images)

Governor: Russian army command leaves Kherson. According to Mykolaiv Oblast Governor Vitaliy Kim, the Russian army command has been moving to the left bank of the Dnipro River. Earlier, Ukraine reported that it hit a bridge over the Nova Kakhovka dam in Kherson Oblast, thereby preventing Russian forces from easily crossing the river splitting the occupied Kherson Oblast in half.

Commander: Ukraine has defeated one-fifth of Russian military units involved in war. Valery Zaluzhny, commander-in-chief of Ukraine’s Armed Forces, told U.S. Chairman of the Joint Chiefs of Staff General Mark Milley said he was grateful to the “entire American people for effective support in the defense of our heroic nation and common values of freedom and democracy.” He also asked the U.S. to supply more artillery to Ukraine.

UK intelligence: Even if Russia repairs bridges in Kherson Oblast, they will remain a key vulnerability. According to the U.K. Defense Ministry, Ukrainian strikes likely made the road crossing of the Dnipro River at Nova Kakhovka unusable for heavy military vehicles, while the damaged Antonivsky road bridge likely remains structurally undermined. The ground resupply for the several thousand Russian troops on the west bank of the Dnipro River in Kherson Oblast is “almost certainly reliant on just two pontoon ferry crossing points.” “With their supply chain constrained, the size of any stockpiles Russia has managed to establish on the west bank is likely to be a key factor in the force’s endurance,” the ministry said.

Fitch, S&P cut Ukraine’s rating to selective default. The rating agencies downgraded Ukraine’s foreign currency ratings following the country’s request for a two-year freeze on payments on international bonds totaling $20 billion, a move made by the government to protect the economy from a debt default. “Given the terms and conditions of the restructuring, and in line with our criteria, we view the transaction as distressed and tantamount to default,” S&P said.

Reuters: Two more cargo ships leave Chornomorsk port. The Barbados-flagged Fulmar S loaded with 12,000 tonnes of corn is heading to Turkey’s southern Iskenderun province, Reuters reported on Aug. 13, citing the Turkish Defense Ministry. The Marshall Island-flagged Thoe carrying 3,000 tonnes of sunflower seeds is heading to Turkey’s city of Tekirdag. A total of 16 ships have recently departed from Ukraine under the UN-backed agreement with Ukraine and Russia to resume exports of Ukrainian grain through the Black Sea, Reuters reported.

Military: Ukraine shoots down Russian Su-25 jet. Over the past 24 hours, the Ukrainian military also destroyed four Russian Orlan-10 drones in the east of Ukraine, the Joint Forces Operation reported on Aug. 13. According to Ukraine’s General Staff, Russia had lost 233 airplanes and 779 drones since Feb. 24.

Podolyak: Russian troops shell nuclear plant to cut off Ukraine from energy. Mykhailo Podolyak, the advisor to the President’s Office, said that Russian troops are shelling the Zaporizhzhia Nuclear Power Plant to cut Ukraine’s south from electricity and blame it on the Ukrainian Armed Forces. An unnamed engineer from the plant told BBC that Russian forces are deliberately destroying the powerlines. President Volodymyr Zelensky, calling for sanctions against Russia’s nuclear industry, said in an address to the nation that each day of the Russian occupation of the Zaporizhzhia Nuclear Power Plant in Enerhodar dramatically increases the radiation threat for Europe.

General Staff: Russia continues offensive near Donetsk, heavy fighting reported. Ukraine’s General Staff reported on Aug. 13 that the Russian troops are aiming to break the Ukrainian defense lines near Avdiivka, Pisky, Mariinka, Oleksandropil, and Krasnohorivka, in Donetsk Oblast. The Russian forces are trying to advance near Yakovlivka, Bakhmut, Vershyna, and Zaitsevo. Russian forces are shelling multiple settlements in the region.

Nights are short in the southern embattled city of Mykolaiv. Since Russia took control of neighboring Kherson in early March, Ukraine’s shipbuilding capital has been shelled nonstop. Counting the dead has become a daily routine for Mayor Oleksandr Sienkevych. The morning of July 29 was no exception. Read our story here.

Russia says US recognizing it as state sponsor of terrorism would be ‘point of no return.’ Russian diplomat Alexander Darchiev told the Russian state-controlled media TASS that recognizing Russia as a state sponsor of terrorism would lead to “the most serious collateral damage to the bilateral diplomatic relations,” adding that Russia might lower the level of or even cut diplomatic relations with the U.S.

Banker: US says India hid Russian origin of fuel shipped to US. Reserve Bank of India Deputy Governor Michael Patra said that, according to the U.S. Treasury Department, an Indian vessel has taken oil from a Russian tanker on the high seas and brought it to a port in Gujarat. There, the crude oil was processed and shipped to the U.S. in violation of Western sanctions, the Treasury Department said.

Media: Drunk Ukrainian diplomats get into car accident in Vienna. According to Austrian newspaper Kronen Zeitung, the car of a Ukrainian military attaché with diplomats inside has crashed into a car with four German tourists. One of the Ukrainian diplomats refused to take a breathalyzer test, and the test of another diplomat showed a high level of alcohol in the body. Oleh Nikolenko, a spokesman for Ukraine’s Foreign Ministry, said that diplomatic status does not give anyone the right to “violate traffic rules and endanger other people.” The decision on further steps regarding the diplomats will be based on the results of the investigation, he said.