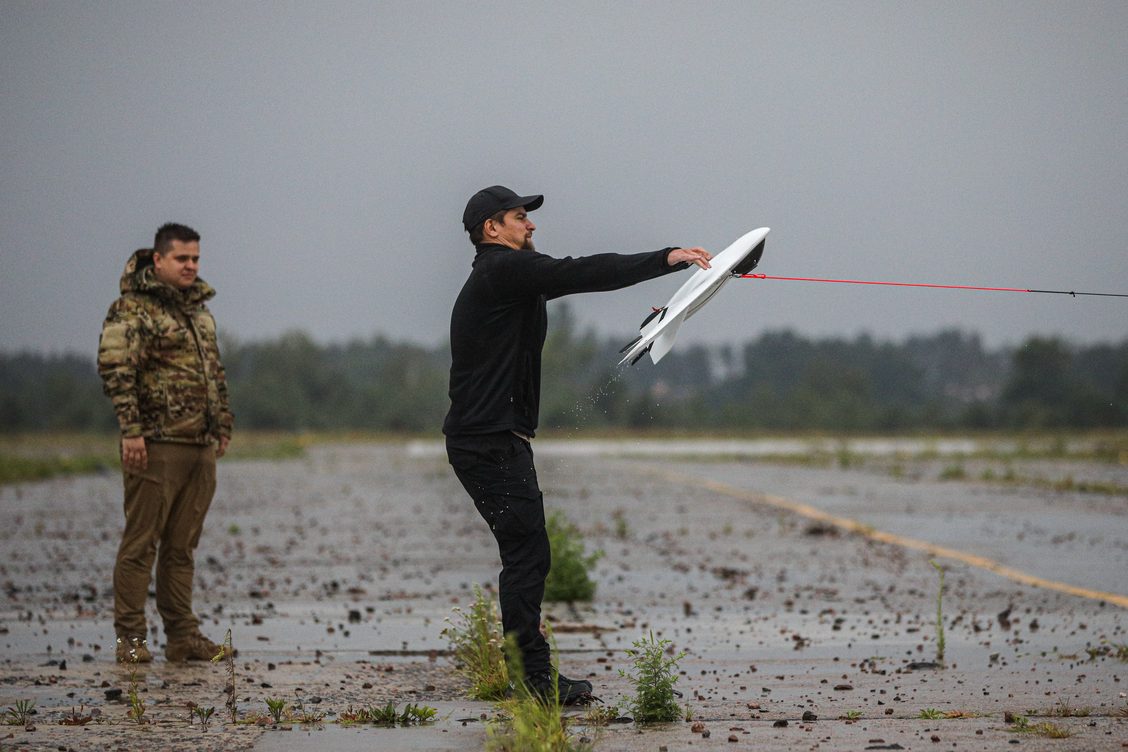 Operator launches a reconnaissance SKIF drone, produced in Ukraine, as a part of the program ‘The Army of Drones’ during test flights in the Kyiv region on August 2, 2022. (Kostyantyn Chernichkin)

Atomic agency: Russia’s shelling of Zaporizhzhia Nuclear Plant could be ‘nuclear disaster.’ The attacks on Europe’s largest nuclear power plant “underline the very real risk of a nuclear disaster,” said Rafael Mariano Grossi, the Director General of the International Atomic Energy Agency (IAEA). According to Grossi, Ukraine has informed the IAEA that there is no damage to the reactors themselves, but the IAEA’s presence at the plant is “of paramount importance” and it is ready to deploy a mission. Meanwhile, President Zelensky drew attention to Amnesty International during his evening address, after the organization failed to release a report on Russia’s shelling of the Zaporizhzhia plant. On Aug. 4, Amnesty International published a report, which accuses the Ukrainian military of endangering civilians.

Institute for the Study of War: Russian opposition outlet alleges Russian army storing mines, explosives at Zaporizhzhia Nuclear Plant. The U.S. think tank cited opposition outlet The Insider in its Aug. 6 report, by saying that Russian forces may have already mined the Zaporizhzhia Nuclear Power Plant and established Grad rocket batteries near the village of Vodyane, approximately 4 km from the plant’s reactors. The experts previously assessed that Russian forces are likely using the plant to play on Western fears of a nuclear disaster in Ukraine in an effort to degrade Western resolve to provide military support to a Ukrainian counteroffensive, while also effectively using the plant as a nuclear shield to prevent Ukrainian strikes on Russian forces and equipment.

Zelensky: 1,060 settlements are liberated. President Volodymyr Zelensky said during his evening address on Aug. 6 that at least 1,060 out of 3,649 settlements have been liberated from Russian occupation. However, most of them require significant restorative work and demining. The previous update from July 18 stated at the time that 1,028 settlements had been liberated.

Eight-year-old boy performs outside to raise $1,700 for Ukraine’s military. Serhiy, from Chernihiv, handed over the money he gathered from singing Ukrainian songs outside to the Serhiy Prytula Charity Foundation, the organization said on Aug. 5. The young boy said that he would like the money to be spent on a jeep, a thermal imaging camera, weapons or protective ammunition for Ukrainian soldiers.

Official: Pivdennyi Port to begin operations next week. The largest and most profitable port in Ukraine will begin to operate next week under the Black Sea Grain Initiative, Mustafa Nayyem, deputy infrastructure minister announced. Nayyem said that the Pivdennyi Port will work alongside the Odesa and Chornomorsk ports to export 3 million tons of Ukrainian agricultural products within a month. Since Feb. 24, four ships have left from the Odesa and Chornomorsk ports.

Russian shelling kills 1, injures 5 in Mykolaiv Oblast. A retiree was killed by Russian shelling on Aug. 6 in the village of Bereznehuvate, local authorities reported. Russian forces are shelling the entire front line between Mykolaiv and occupied Kherson, according to authorities.

North Macedonia sends 4 Su-25 aircraft to Ukraine. Mykhailo Podolyak, adviser to the head of the President’s Office, confirmed on Aug. 6 the country had sent the planes it received from Kyiv in 2001 back to Ukraine. “Many nations today show more courage than half of the G20,” Podolyak wrote on Twitter.

Amnesty International’s Polish Office condemns Russia’s war crimes. The NGO’s Polish branch stressed that Ukraine’s military is “defending from a cruel and unjust attack, fighting in unequal conditions imposed by the aggressor,” as Russian troops have been carrying out “inhumane attacks not only on individual civilian objects but also on multimillion cities, small towns and villages, often populated only by civilians.” The comments come as a response to Amnesty International’s report published on Aug. 4 accusing Ukraine’s military of endangering civilians.

Erdogan: Turkey ready to host a potential Zelensky-Putin summit. Turkish President Recep Tayyip Erdogan said on Aug. 6 that he offered Russian dictator Vladimir Putin to hold talks with Ukrainian President Volodymyr Zelensky in Turkey. “Despite the difficulties, I also maintain a firm belief that the crisis will be resolved at the negotiating table,” Erdogan said, referring to Russia’s full-scale war.