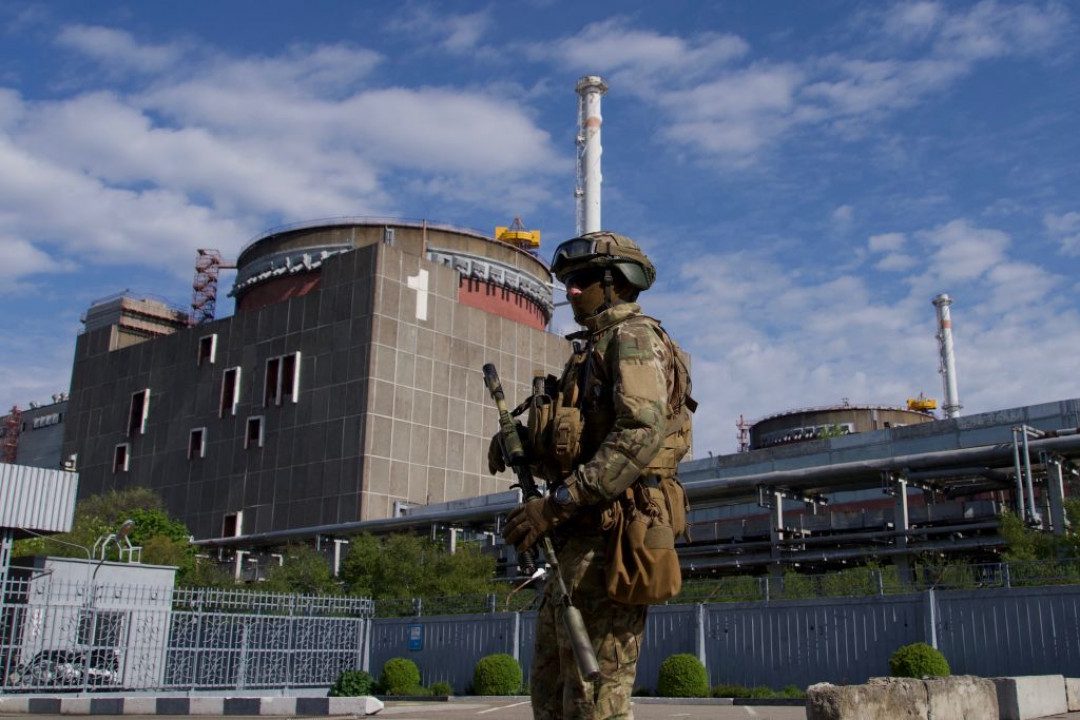 A Russian soldier patrols the territory of the Russian-occupied Zaporizhzhia Nuclear Power Plant in Enerhodar on May 1, 2022. (ANDREY BORODULIN/AFP via Getty Images)

Zelensky: Russian occupiers already know it’s time to leave Kherson. Addressing residents in Russian-occupied territories in Ukraine’s south, President Volodymyr Zelensky said that “no matter what the occupiers promise, their only option at best is to escape, that is if they can in time.” Ukraine has begun to make moves to launch a counteroffensive to take back the southern city of Kherson, occupied by Russia in the early days of the invasion.

Schemes: First satellite images show damaged Russian air base in Crimea. Satellite images taken by Planet Lab show Saky airfield in Crimea after the explosions on Aug. 9, according to Schemes, Radio Free Europe / Radio Liberty’s investigative journalism program in Ukraine. The images confirmed earlier statements made by Ukraine’s Air Force that 9 aircraft were damaged, including Su-30 fighter and Su-24 bomber jets. As well, the satellite images reveal that a warehouse-like premise was affected.

Yermak: It is vital to end active phase of Russia’s war by winter. President Volodymyr Zelensky’s Chief of Staff Andriy Yermak said in an interview with Interfax Ukraine that while it may be “a challenging and ambitious task,” Ukraine is “doing everything to ensure that de-occupying the whole country is achieved” and to prevent Moscow from prolonging the war. The results will depend on whether Ukraine’s allies provide timely military assistance, Yermak said.

Ukraine’s ambassador in Lebanon: 87 ships currently transporting Ukraine’s stolen grain. Ambassador of Ukraine to Lebanon Ihor Ostash said on Aug. 10 that Russia has fully established a criminal system of transporting stolen grain from Ukraine, using “mainly Syrian and Russian vessels, and not only that” through Turkey, Syria, and other countries of the Middle East. The first grain ship to leave Ukraine since Russia launched its invasion on Feb. 24 departed from Odesa on Aug. 1 but the buyer in Lebanon, its final destination, refused to accept the cargo due to a delivery delay of more than five months.

Annual inflation in Ukraine reaches 22.2% in July. According to the State Statistics Service of Ukraine, consumer prices in Ukraine accelerated to 22.2% in July compared to last year. Earlier in July, the National Bank of Ukraine said that inflation in Ukraine will reach over 30% in 2022, while the country’s GDP is expected to decrease by a third this year amid a Russian invasion that is causing significant losses to Ukraine’s economy.

Report: Ukraine needs at least $188 billion for post-war reconstruction. According to the KSE Institute team (the analytical unit of Kyiv School of Economics), Russia’s war in Ukraine have led to a direct loss of $110 billion worth of residential and non-residential buildings, and infrastructure sites, $2.1 billion of which was only from the past week.

G7 urges Russia to hand control of Zaporizhzhia nuclear plant back to Ukraine. Foreign ministers of the G7 nations in a statement released on Aug. 10 called on Russia to “immediately” hand back full control of the plant to Ukraine amid heightened nuclear concerns over Russia’s shelling in the area. The ministers also added that Ukrainian staff operating the plant “must be able to carry out their duties without threats or pressure.” Russia seized control of the nuclear power plant in early March and is using the site as a military base to launch attacks on Ukraine.

Swedish co-founder leaves Amnesty International due to controversial report on Ukraine. “I have now been a member for almost sixty years. It is with a heavy heart that I, in view of Amnesty’s statements on the war in Ukraine, end a long and rewarding commitment,” Per Wästberg, a co-founder of the organization, said. Amnesty International triggered a scandal by publishing a report on Aug. 4 claiming that Ukrainian troops are endangering civilians by deploying weapons in residential areas. Shortly after the report was published, Oksana Pokalchuk, head of Amnesty International’s Ukrainian branch, also resigned in protest.

Ukraine’s military heavily damage Kakhovsky Bridge in Kherson Oblast. The dam bridge is unusable after Ukraine’s Armed Forces strike, the Kherson Regional Administration confirmed. The bridge provides a supply route for the Russian forces. It’’s the second bridge that has recently been damaged by a Ukrainian attack in Kherson Oblast.

Reuters: Ukraine’s overseas creditors agree on 2-year freeze on almost $20 billion worth of debt. Ukraine’s overseas creditors backed a request to postpone sovereign interest and capital payments for 13 Ukrainian sovereign bonds maturing in the 2022-2023 period, Reuters reported, citing a regulatory filing. Ukraine, for whom the move would help avoid a messy debt default as Russia continues to wage war in the country, said it would save around $5 billion over the next two years as it manages its shrinking resources.

Anticipating a Ukrainian counter-offensive in the country’s south, Russia is turning the six-reactor Zaporizhzhia Nuclear Power Plant in occupied Enerhodar into a ticking time bomb. Repeated Russian shelling from within the plant’s territory, causing one of the reactors to shut down, has put the entire complex’s safety at stake. Read our story on how an occupied Ukrainian plant becomes the epicenter of Russia’s nuclear blackmail.

Victim injured in Russian missile strike on bus stop in Mykolaiv dies in hospital. Mykolaiv Mayor Oleksandr Senkevych reported that a man in his late 50s died on Aug. 9 after going through several surgeries, increasing the death toll of the July 29 attack in the southern city to eight.

Intercepted call shows Russian officer ordering murder of civilians. In the intercepted conversation, Russian officer Anton Struev orders a subordinate to kill civilians in Brovary District, Kyiv Oblast, in March, according to the Security Service of Ukraine (SBU). The service said that he is an intelligence officer at Russia’s 15th Separate Guards Motor Rifle Brigade.

BBC: UK to provide Ukraine with three additional MLRS. While at a conference in Copenhagen, British Defense Secretary Ben Wallace announced that the U.K. will send three more rocket launchers to Ukraine, doubling the total in Ukraine’s arsenal. MLRS are similar to American HIMARS and use the same missiles that have a range of up to 80 km. Wallace said he is “very pleased” with Ukraine’s use of MLRS, and according to him, Ukrainian forces have demonstrated that they have improved their ability to hit precise targets, specifically Russian ammunition depots and command centers.

Czech Foreign Minister supports calls to stop issuing EU tourist visas to Russians. Czech Foreign Minister Jan Lipavsky said there should be no questions about halting tourism of ordinary Russian citizens when Ukraine is under attack and that he intends to raise the issue at an EU foreign ministers’ meeting to be held in late August, Czech News Agency reported. The Czech Republic became the first EU nation to stop issuing visas to Russian citizens on Feb. 25 and later implemented a similar ban for Belarusian citizens.

New York company raises over $120,000 to make action figure of Zelensky. FCTRY, a Brooklyn-based product design company, launched a Kickstarter campaign to fund the production of a 15-centimeter-tall President Volodymyr Zelensky clay prototype. Over the course of Russia’s war, Zelensky has won global praise for his defiance in resisting Russia’s brutal war unfolding in his country.

U.S. to fund $89 million demining project in Ukraine. The U.S. State Department said that it would fund the deployment of about 100 demining teams and support a large-scale training and supply project to strengthen Ukraine’s demining capacity. “Landmines, unexploded ordnance, and other hazards block farmland, delay reconstruction, keep people from returning, and kill and maim innocent Ukrainians,” U.S. Ambassador to Ukraine Bridget Brink said.

Creative executive Yaryna Vyshenska, 27, was on vacation in Turkey when she woke up on Feb. 24 to the news that Russia had started a full-fledged invasion of Ukraine. As the war progressed, she built a nonprofit to contribute to Ukraine’s fight by helping those Ukrainian women, men and children who suffered sexual violence from Russian soldiers. Read our story on how young women are driving Ukraine’s civil society during war.